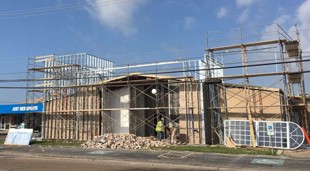 United Equities in the News

Food and fitness for Bellaire

The former Earthman Funeral Home in Bellaire and a neighboring mid-century building will get a new use as a retail redevelopment that will bring neighborhood options for food and fitness.

United Equities, a local company with several Bellaire properties, acquired the buildings in the 6700 block of Ferris a few months ago. The properties are a couple of blocks from the planned two-story H-E-B grocery store.

Work is under way to transform the 10,500-square-foot funeral building into a multi-tenant space including Define fitness studio, set to open in April.

Owner Debrah Hall selected the site for the building's potential, its ample parking and Bellaire's sense of community. The new space will have a French country feel with a calming atmosphere, she said. There will be areas for a cycle room, body classes, hammock classes, trampoline classes plus childcare.

"In addition, there didn't seem to be a whole lot of exercise options in the area," Hall said.

Other tenants will be Nekter Juice Bar, a California chain expanding in the local market, and The 401, a new concept named for the last part of the Bellaire ZIP code affiliated with the Hungry's chain.

"I think it's just what people are looking for - a modern, fun place to eat and shop without leaving the neighborhood," Doug Freedman of United Equities said.

"Bellaire has always been known as the 'City of Homes' and there's been very limited commercial development over the years."

Details are also being finalized for a lease that will bring a well-known, local restaurant to the other building, Freedman said.

The former Earthman Funeral Home, built in 1960, has 1,600 square feet remaining for lease, and the building next door has 6,000 square feet available.

The redevelopment comes as Bellaire is getting one of the first two-story H-E-B stores. The current 36,000-square-foot store, built in 5100 block of Bissonnet in the early 1990s, will be demolished starting in March to make way for a 70,000-square-foot double-decker.

Freedman, a Bellaire resident, helped several former tenants of the H-E-B shopping center relocate, including some that moved to United Equities' buildings.

Another long-standing Houston funeral home redevelopment was short-lived. The Settegast-Kopf funeral home on Kirby Drive was turned into several clubs, which have since been demolished. It's now the site of the Kirby Collection mixed-use development.